"Hear the Word!" by Bill Ayres: First Sunday of Advent 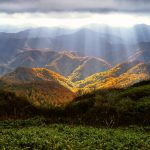 A reading from the Book of the prophet Isaiah
(Chapter Chapter 2:1-5)

“In days to come the mountain of the Lord’s house shall be established as the highest mountain and raised above the hills….For from Zion shall go forth instruction and the word of the Lord from Jerusalem. He shall judge between the nations, and impose terms on many peoples.”

The two important points here are that God will “judge between the nations” and that God’s word comes “from Jerusalem.” What is God’s word to the nations? “They shall beat their swords into plowshares and their spears into pruning hooks; one nation shall not raise the sword against another, nor shall they train for war again.” If they do these things, they will “walk in the light of the Lord.”

If only nations had obeyed this command, millions of innocent people would not have been killed right up to today. Jesus himself preached and lived non-violence as should we in our own lives.

Paul knows that he will be killed and so he wants to let the Romans to know how important it is for them to stay the course and not fall into bad habits that were rampant throughout the city. Of course, the same holds true for we who live in an age that is all too prone to excuse these same excesses.

A reading from the holy Gospel according to Matthew
(Chapter 24:37-44)

After Jesus died there was a belief that he would come back again on the last day. But when? Matthew wants to tell people to “Stay awake! For you do not know on what day your Lord will come. Be sure of this: if the master of the house had known the hour of night when the thief was coming, he would have stayed awake and not let his house be broken into. So too, you must also be prepared, for at an hour you do not expect, the Son of Man will come.”

This belief that Jesus would come back, perhaps in their lifetime and that the world would then end was very popular among Christians in the decades after the death of Jesus. It was intensified by the constant threat of prison and execution at the hands of the Romans. Even today, there are sects of Christianity that believe that the world will end soon, and Jesus will return. They go up to a mountain or some other remote place and wait, and wait until it becomes apparent that the time is not now.

We have no idea when the world as we know it will end, but we do know that our lives here on earth will end at our death. We know not the day or the hour, but we pray for a long and healthy life and then, even more important, a new resurrected life forever with Jesus.