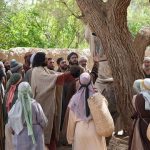 This book was written in Alexandria, only about one hundred years before the birth of Jesus, by a man who at times assumes the voice of King Solomon to make sure his readers pay attention to its important messages. It is one of the few places in which Jewish scriptures refer to an after-life. The main truth that the author wants to covey to his readers is how good and powerful is their God who cares for them dearly.

“Before the Lord the whole universe is as a grain of sand….And how could a thing remain, unless you willed it; or be preserved, had it not been called forth by you? …But you have mercy on all, because you can do all things; and you overlook people’s sins that they may repent. For you love all things that are….But you spare all things, because they are yours; O Lord and lover of souls, for your imperishable spirit is in all things!”

Wow! In a few short sentences the author gives us a picture of who God really is: all powerful, all loving, all merciful, and forgiving.

“I will praise your name forever, my king and my God.” The Jewish people had many kings in their ancient history, a few good and others weak or corrupt. Fortunately, we have a democracy with no king, but we can still praise God forever. What do you most want to praise God for?

A reading from second Letter of Saint Paul to the Thessalonians
(Chapter 1:11-2:2)

“Brothers and sisters: We always pray for you, that our God may make you worthy of his calling and powerfully bring to fulfillment every good purpose and every effort of faith, that the name of our Lord Jesus Christ may be glorified in you, and you in him, in accordance with the grace of our God and Lord Jesus Christ.”

This is the beginning of a follow-up letter to the Thessalonians and was probably written from prison with the help of Paul’s friends and disciples, Timothy and Silvanus. Paul wants to clear up what was one of the first great controversies in the early Church: When would Jesus would come again at the end time? Many, including Paul at first, thought that Jesus would come back very soon, but now, some twenty years after the resurrection, there was still no Jesus, no second coming. Remember, this was during a time of severe persecution of Christians and many felt reassured by believing that Jesus would come again soon. So, Paul warns them about “a letter allegedly from us to the effect that the day of the Lord is at hand.” He wants them to know that there is no such letter. What a disappointment! Did it cause some followers to leave and give up hope? We don’t know, but since Paul too had believed it, he wants to set the record straight before he dies.

We live in a time of turmoil in our Church that can affect our own faith. It is hard to stay faithful in the midst of reoccurring scandals and many proposed changes in Church practice. But no one is threatening our lives as the Roman Empire threatened Christians two thousand years ago. No one is persecuting us for our beliefs. We are not expecting the second coming of Christ to be anytime soon. Still, the faith of many has been shattered or at least weakened. Let us reach out to our brothers and sisters who live in growing doubt and help them and ourselves to focus on what is most important: our faith in Jesus and the presence of the very Spirit of God living in us—yes, in our very persons—and the abiding love of the Father.

A reading from the holy Gospel according to Luke
(Chapter 19:1-10)

This is an important parable, because it turns the tables on the people who thought that only they were good and this hated tax collector was not worthy to have Jesus dine at his house. Zacchaeus was indeed an unjust, greedy man, a dreaded tax collector who was an important part of an evil oppressive empire. Yet, he repented and was forgiven by Jesus. We should not take this story lightly. This was a “big deal,” because Jesus was saying “for the Son of Man has come to seek and to save what was lost.” It is never too late for a change of heart that is accompanied by a change of behavior.
Have you ever witnessed that kind of radical forgiveness extended to anyone you know? Or, more important, do you know anyone who needs that forgiveness now? Maybe you can tell that person the good news of God’s mercy.