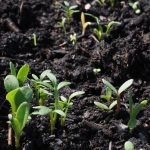 Most of Israel at this time—the sixth century before the birth of Jesus—was a desert or close to it. The people were dependent on the spring rains to grow food. This last part of the Book of the Prophet Isaiah was written as the people came back from the Babylonian Exile. At last they are home, but home is a desert. Isaiah assures them that “the rain and snow come down and do not return till they have watered the earth, making it fertile and fruitful, giving seed for the one who sows and bread for the one who eats.” Then, he connects it with something even more important. “So shall my word be that goes forth from my mouth; my word shall not return to me void, but shall do my will, achieving the end for which I send it.” The Israelites understood this, that God’s word is powerful and accomplishes what God intends.

As we suffer through another week of deaths and illnesses in the pandemic, we may wonder, in our darkest moments, where the word of God is taking root. It’s taking root in the free will and goodness and bravery of so many people who are doing the right thing and saving lives.

“The seed that falls on good ground will yield a fruitful harvest.” Our hope is that the “good ground” of the world’s best scientists will yield the fruit that will heal the world. Let us pray for them.

A reading from the Letter of Saint Paul to the Romans
(Chapter 8:18-23)

Here is a statement by Saint Paul that we need to hear and understand: “Brothers and sisters: I consider that the sufferings of the present time are as nothing compared to the glory to be revealed for us.” The sufferings that Paul was talking about included the oppression imposed by the Roman Empire and the grinding poverty that affected most people. But there is a great hope:

“We know that all creation is groaning in labor pains even until now; and not only that, but we ourselves, who have the firstfruits of the Spirit, who also groans within ourselves as we wait for adoption, the redemption of our bodies.” I never thought of it what way, but maybe that groaning that we feel inside of us from time to time, especially now, is the Spirit inside of us, letting us know that we are not alone.

A reading from the holy Gospel according to Matthew
(Chapter 13:1-23)

Most of the Israelites were farmers, so Jesus often used examples that they could understand. Here he tells them, “A sower went out to sow.” This was an important job. If you did not do it correctly, nothing would grow. “And as he sowed, some seed fell on the path, and birds came and ate it up. Some fell on rocky ground, where it had little soil. It sprang up at once because the soil was not deep, and when the sun rose it was scorched, and withered for lack of roots. Some fell among thorns and the thorns grew up and chocked it. But some fell on rich soil and produced fruit, a hundred or sixty or thirtyfold. Whoever has ears ought to hear.”

“The disciples approached him and said, ‘Why do you speak to them in parables?’” And Jesus answered, “Because knowledge of the mysteries of the kingdom of heaven has been granted to you, but to them it has not been granted…. But blessed are your eyes, because they see, and your ears because they hear. Amen, I say to you, many prophets and righteous people longed to see what you see but did not see it and to hear what you hear but did not hear it.”

Now, let’s move away from agriculture to our lives today. Have you ever had the Word stolen from your heart? Was it because of personal tragedy or our present societal tragedies? Did you grow up with joy in your heart as a child, only to have it lose its power as you grew older? Have the “thorns of anxiety” chocked the Word in your heart? Do you worry about things that you cannot control and shouldn’t try to, but you do, over and over? Are you a one who hears the Word and understands it, and has it borne great fruit in your life? Or, have you had several of those experiences going on at different times in your life? Join the club! Or should I say, come to the community of us believers who do not always find it easy to believe but persevere in faith.