The Everyday Gospel: And he shall reign 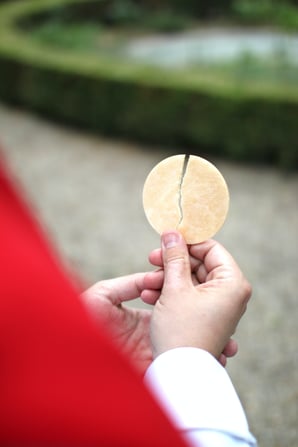 One of the memorable images among the events surrounding the death of Queen Elizabeth II was of a woman kissing King Charles on the cheek as he greeted members of a crowd gathered outside Buckingham Palace.

The woman, a Cypriot named Jennifer Assiminios, later told the press that she had asked permission to kiss Charles and that he had granted it.

Although Elizabeth had established an emotional bond with many of her subjects, it did not exhibit itself in anything as intimate as a kiss. So perhaps, by accepting that one kiss, Charles nudged the monarchy a little way off of its traditional distance from its subjects.

Not being British, I have no opinion about the British monarchy either as an institution or, for that matter, about the endurance of monarchy in the modern world. I once asked a chemist in Denmark why such a progressive country still had a queen. He said, “Well she is Denmark, isn’t she?” and I suppose that was as good an answer as any.

Many countries have long since dispensed with their kings, queens, and emperors, but there are 44 sovereign states in the world that have monarchs, including 15 that recognize the British monarch as their own. In a few of these places, monarchs have absolute power; in a few, their role is largely symbolic. And in some countries, the king or queen shares the responsibilities of government with an elected body, a parliament or legislature.

Abdullah bin Hussein, the king of Jordan, has gone out of his way to have personal contact with Jordanian citizens. More often, though, kings prefer to be physically, emotionally, and spiritually distant, separate, apart from their subjects, That’s not our King.

As Americans, of course, we have no monarch, but as Christians we have a “King of the Universe” as we will again proclaim Jesus this weekend.

While we have the greatest respect for Jesus and try to live in keeping with what he taught us about love of God and love of each other, we do not have to keep our physical or psychic distance from him. On the contrary, Jesus invites, urges, all of us to approach him in the most intimate way possible.

Jesus is the king who, during his life on earth, made a point of touching people whom others would rather not touch ¾ and that was a clear sign of the relationship he wanted to have with all of us.

This why the Church, Pope Francis in particular, and the American Catholic bishops during the current three-year “Eucharistic revival,” stress the importance of each Christian having a personal encounter with Jesus -- an encounter that occurs in our prayer life, when we speak to Jesus as the loving friend he is, and in our liturgical life when we come in physical contact with him in the Eucharist, in his body and his blood.

In the prophecy of Daniel, we read about the Messiah, “He received dominion, glory, and kingship; nations and peoples of every language serve him.”

That is a legitimate image of Jesus, the Christ, who is the Son, the second person of the Holy Trinity—who is God. But it is indispensable to our Catholic faith to always keep before us, too, the words of the author of the book of Revelation who describes Jesus as “the ruler of the kings of the earth” but in the next breath as “him who loves us.’’

Photograph by Sylvain Brison on Unsplash.

Charles Paolino is managing editor at RENEW International and a retired permanent deacon of the Diocese of Metuchen. This post was first published in The Catholic Spirit, the Metuchen diocesan newspaper ,.