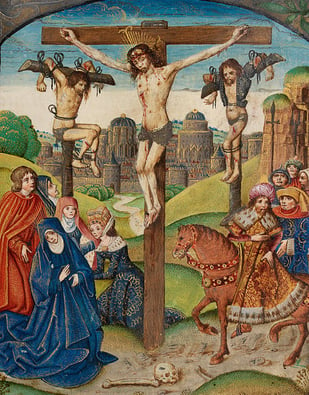 A reading from the Second Book of Samuel

In this passage we read that David was called to be king and leader of Israel. The Christian biblical writers saw Jesus as both the successor and the perfection of David’s rule—not only over Israel but over the whole world. These days, most kings and queens have only ceremonial functions where they exist at all. When the Church began observing this solemnity in 1925, it was identifying Jesus with the power still being exercised by royalty in many places but contrasting his eternal rule with the finite dominion of earthly kings. Today, we recognize that Jesus' kingdom embraces all mankind, but we focus too on the loving, healing aspects of his power.

“Let us go rejoicing to the house of the Lord.” Do you and I rejoice when we come for Mass each week, or do we take it for granted and as an obligation rather than a gift worthy of rejoicing?

“He is the head of the body, the church.” This is a central teaching of our faith, that there is a bodily connection between Christ who is the head of the body, and the Church, which is itself the body of Christ. You can’t get any closer. “In him were created all things.” Everything was created in and for Christ. This was a hymn in the early Church, and it reflected what the followers of Jesus believed from the beginning and what we believe and experience in the assembly of the Church and in the Eucharist.

The soldiers mockingly tell Jesus, “If you are King of the Jews, save yourself.” And one of the other two men being crucified that day implores Jesus, “Save yourself and us.” But Jesus uses his saving power not for himself but in response to the penance of one of those men who admitted his guilt and asked Jesus, “Remember me when you come into your kingdom.” Jesus forgives him and promises him eternal life. This is the climax of Luke’s portrayal of Jesus as a loving, forgiving savior, something we have heard throughout this liturgical year. The “good thief,” as he is often described, was a lucky man indeed. And so are we lucky. Each of us has that same chance for forgiveness at any and all times in our lives. We need only ask.

Image: Christ on the Cross Between Two Thieves, unknown author. Illumination from the Vaux Passional in the Peniarth Manuscripts. Public Domain. National Library of Wales.