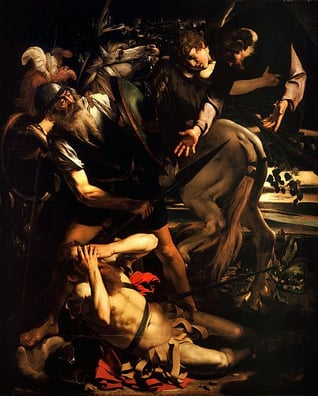 There is a controversy about when the Book of Revelation was written, whether around 70 AD or much later in the 90s. We know from the text that it was written during a time of terrible persecution by the Roman emperors who saw Christians as a major threat to their power. In this reading, John gives the Christians hope, a new vision. “Then I, John, saw a new heaven and a new earth. . . . I also saw the holy city, a new Jerusalem, coming down out of heaven from God, prepared as a bride adorned for her husband. . . . I heard a loud voice from the throne saying, ‘Behold, God’s dwelling is with the human race. He will dwell with them and they will be his people and God himself will always be with them as their God.’”

It is now time for Jesus to leave and go to his Father. He gives the disciples a beautiful gift and a challenge: “My children, I will be with you only a little while longer. I give you a new commandment: love one another. As I have loved you, so you also should love one another. This is how all will know that you are my disciples, if you have love for one another.”

That’s it! Simple, powerful, life-giving, and challenging! It was all of that for the early disciples who needed to stand by one another in a time of crisis, persecution, and possible betrayals. History records many instances of persecution against the Church, in the Church, and sometimes by the Church. Could it all have been avoided if during the two thousand years of our history as the people of God we had followed this simple, profound gift, living the call of Jesus to love one another? Yes, of course, easier said than done, but possible for us today if we first totally accept the gift of merciful all powerful love from Jesus. This is not something we promise to do, and then it happens. It is a lifelong journey into the mystery of God’s unconditional, ever-present merciful love. It is a love that we can never earn, no matter how we might try. But we need not try, only accept this love that Jesus gave to the disciples two thousand years ago and still gives us today.

Topics: Reflections on the coming Sunday's Gospel, God's unconditional love for all, Hear the Word! by Bill Ayres, RENEW International