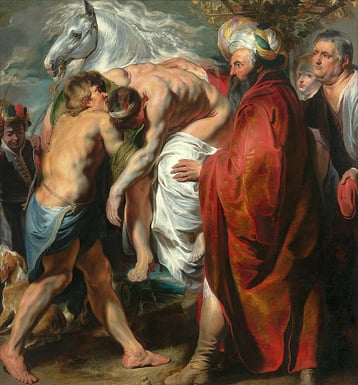 A reading from the Book of Deuteronomy

Moses said to the people: “If only you would heed the voice of the Lord, your God, and keep his commandments and statutes that are written in this book of the law, when you return to the Lord your God, with all your heart and all your soul. For this command that I enjoin on you today is not mysterious and remote for you. . . . No, it is something very near to you, already in your mouths and in your hearts; you have only to carry it out.”

The Law of Moses was superior to any other law that existed at that time. Moses was saying that the people had this Law not only in their mouths but in their hearts. There was a beautiful intimacy there that became much more complicated over the centuries as various priests of the temple, rabbis, Sadducees, and Pharisees piled on hundreds of dietary and other laws that became a terrible burden for the people and pushed them away from the powerful simplicity of the Mosaic Law, which focused on loyalty to the one God.

“Your words, Lord, are Spirit and life.” Which of God’s words give you Spirit and life? Ideally, it is love, God’s love for you and the love you share with others.

This is one of the most beautiful canticles in all of Scripture. It tells us who Christ is: “Christ Jesus is the image of the invisible God, the firstborn of all creation. For in him were created all things in heaven and on earth, the visible and the invisible, … He is before all things, and in him all things hold together. He is the head of the body, the church. He is the beginning, the firstborn from the dead, that in all things he himself might be preeminent.”

Paul wants his readers and all who heard him to know the place of Jesus Christ in all of creation. This is not just another prophet or religious leader. No, he is the presence of God in our midst and being “the firstborn from the dead,” he brings eternal life to all. That is worth taking the chance that, even if you are martyred, you will have a new life with Jesus. That is the same promise that awaits us now.

(Chapter 10:25-37)
From time to time there were “smart guys,” in this case, “a scholar of the Law who stood up to test him and said, ‘Teacher, what must I do to inherit eternal life?’ Jesus said to him, ‘What is written in the Law? How do you read it?’” So, this smart guy said, “You shall love the Lord, your God, with all your heart, with all your being, with all your strength, and with all your mind, and your neighbor as yourself.” Jesus answered him, “You have answered correctly, do this and you will live.”

Then came the trick question. Because the man wanted to justify himself, he asked Jesus, “And who is my neighbor?” Jesus replied with one of the most important parables in the gospels, the story of the Good Samaritan. A man coming from Jerusalem “fell victim to robbers” who “stripped and beat him and went off leaving him half-dead.” A priest of the temple and a Levite came that way and passed him by. Why? Jesus does not say, but perhaps it was because they were on their way to the temple and did not want to be defiled by blood and prevented from worshiping in their official roles. Then, there was a twist in the story as “a Samaritan traveler who came upon the victim was moved with compassion at the sight. He approached the man, poured oil and wine over his wounds and bandaged them. Then he lifted him up on his own animal, took him to an inn and cared for him. The next day he took out two silver coins and gave them to the innkeeper with the instruction, ‘Take care of him. If you spend more than what I have given you, I shall repay you on my way back.”

Then Jesus asked the man the key question: “Which of these three, in your opinion was neighbor to the robbers’ victim?” The man was trapped by his own smart-guy question. So he answered, “The one who treated him with mercy.” Jesus said to him “Go and do likewise.”

Jesus expanded the Law of Love to everyone, including someone you might consider your enemy, as a Jew would have regarded a Samaritan. That’s a tough one! Is there someone that you consider an enemy, in your family, your neighborhood, our country or state? Even though you may strongly disagree with that person, would you help the person in a time of need? Could you try to see that person in a different light, from a different perspective?