'Hear the Word!' by Bill Ayres: Most Holy Body and Blood of Christ 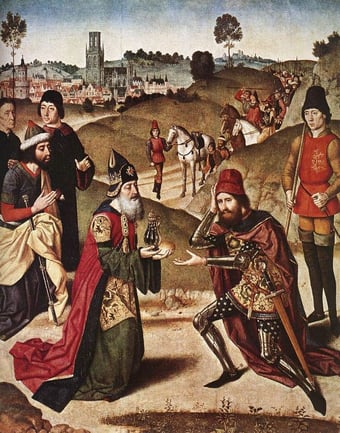 A reading from the Book of Genesis

Abraham was the father of the Jewish people. Melchizedek is a shadowy character from the Book of Genesis who is mentioned only one more time in the Hebrew Scriptures—in Psalm 110. “You are a priest forever, in the line of Melchizedek.” In this reading Melchizedek is described as a king who “brought out bread and wine and, being a priest of God most high, he blessed Abram with these words: ‘Blessed be Abram by God most high, the creator of heaven and earth; and blessed be God most high, who delivered your foes into your hand.’” So, Melchizedek is a priest and a king, and he shares bread and wine with Abram even before Abram becomes Abraham—the name God gives him as “God’s chosen one.”

It is an odd story, but it is in this liturgy because it mentions the sharing of bread and wine which is what we do during at each Mass, with one major difference. We believe that Jesus is truly present in the form of bread and wine as he was at the Last Supper.

“You are a priest forever in the line of Melchizedek.” Every priest that is ordained in the Roman Catholic Church is ordained with these words.

A reading from St. Paul's First Letter to the Corinthians

The Eucharist is the center of our weekly worship, and the center of the Eucharist is our participation in sharing the body and blood of Jesus Christ in the form of bread and wine. In this reading, Paul tells the Corinthians, “Brothers and sisters: I received from the Lord what I also handed on to you, that the Lord Jesus, on the night he was handed over, took bread, and after he had given thanks, broke it and said, ‘This is my body that is for you. Do this in remembrance of me.’ In the same way also the cup, after supper, saying, ‘This cup is the new covenant in my blood. Do this, as often as you drink it, in remembrance of me.’ For as often as you eat this bread and drink the cup, you proclaim the death of the Lord until he comes.”

Remember, in the beginning, after the death and resurrection of Jesus, most Christians, including Paul and the other apostles, believed that Jesus would soon return. Until then, they were to share his presence by celebrating a meal together as Jesus did with the apostles the night before he died. As it gradually became clear that Jesus would not come back as soon as the early Christians had hoped, the celebration of the Eucharist became more and more important and central to their worship, and it kept the various communities together just as it does today with us.

“Jesus spoke to the crowds about the Kingdom of God, and he healed those who needed to be cured.” There we have the two most important ministries that Jesus pursued for three years and that almost all scripture scholars agree were at the core of his preaching: announcing the Kingdom of God and healing people who were suffering. Luke tells us in his Gospel that Jesus was doing this all day, and at the end of the day the apostles told him to “Dismiss the crowd so that they can go to the surrounding villages and farms and find lodgings and provisions; for we are in a deserted place here.” That made sense. They seemed to be saying, “Let’s call it a day. Everybody is hungry, and we do not have anything to give them.”

That is when Jesus displayed another dimension of his gifts. Five loaves and two fish for all those people! How did he do it? We do not know. The news media were not there. But we do know that he healed all sorts of illnesses and touched the minds and hearts of thousands of people. So, we believe that he did feed people on this occasion and many more. We also believe that he feeds us with his very presence at each Eucharist we celebrate. That is much more remarkable than feeding a large number of people, no matter how many, and it happens at every Eucharist.