A Buddhist Response to Laudato Si’ 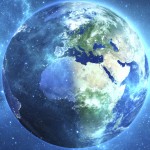 “Every one of us can do something to protect and care forour planet. We have to live in such a way that a future will be possible for our children and our grandchildren. Our own life has to be our message.”
—Thich Nhat Hanh, The World We Have

I'm a Buddhist monk, born in the United States as a Christian. I was baptized at age 28 after being inspired by the teachings of the Buddhist teacher Thich Nhat Hanh to reconnect with my Christian roots. As the years went by, however, I felt powerfully drawn to Buddhist teachings and to the incredible gift they represented to me. Five years later, Thich Nhat Hanh initiated me at my monastic ordination ceremony by touching my head with water, surrounded by our community invoking the name of Avalokiteshvara—the bodhisattva, or awakened being, of great compassion. I have lived my life since then as a Buddhist monk, spending many years at our community in France.