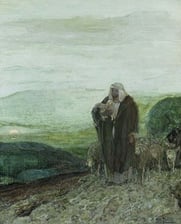 Peter and the apostles are being criticized by the Scribes and Pharisees for healing a disabled man. Peter tells them that the man was healed in the name of Jesus Christ, the very person they condemned to death. This was not the kind of thing that the leaders wanted to hear. They thought they were done with Jesus forever when he was crucified, and now his followers are healing in his name. They thought they must put a stop to this, but they never could, no matter how hard they tried—and they certainly tried.

Jesus was a healer and our Church, founded in his name, should always be about healing, reconciling, forgiving, not condemning and excluding. Pope Francis is working through his words and his deeds to heal so much of what is missing from our Church and to allow the power of the Spirit to heal and unify.

“The stone rejected by the builders has become the cornerstone. “

Throughout the history of Israel, the people have rejected the God who revealed himself through Moses, yet he has remained the cornerstone of faith as Jesus is for us Christians.

It was not too long ago when, right here on Long Island, Catholics were persecuted and often attacked by the KKK and other racist organizations. Crosses were burned in front of churches and Catholics were discriminated against in business and government. Those days are past, but many of our brothers and sisters are still excluded from fully participating in the life of their community, because they are a different color, speak a different language, or practice a different religion. Let us speak in solidarity with our sisters and brothers who suffer discrimination today.

Shepherds were a critical need in ancient society, because sheep were so important for meat and wool. But there were good shepherds who were committed to the safety of the sheep and there were those who were only in it for the money. It was a dangerous job because of wild animals that preyed on the sheep and thieves who tried to steal them.

When Jesus calls himself the Good Shepherd it does not ring so clearly to us, but it did to the people of his time. He would and did give up his life for them and for us today. Jesus says something else about his life that is extraordinary: “I have power to lay it down and power to take it up.” The author is referring to Jesus’ resurrection. His death is not the greatest gift he gave us, rather it is new life for all of us forever through the Resurrection.

Topics: The Resurrection of the Lord, Reflections on the coming Sunday's Gospel, Jesus Christ, RENEW International, The Good Shepherd